The player has to wear the Hazmat Armor or Face Mask in order to explore here. Otherwise, the player will quickly lose HP and die, even if the difficulty is set to Peaceful. 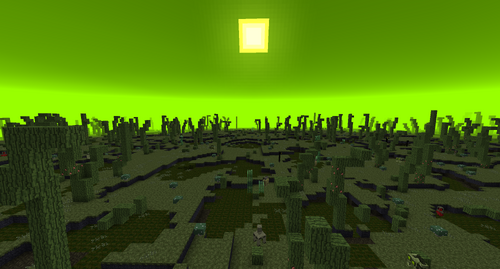 Vox Ponds takes place sometime after some sort of apocalyptic event occurred. Civilization is nowhere to be seen, robotic hostiles roam the surface of the Ponds, and fungi and toxic wastes coat the dead and dark landscape. The atmosphere of Vox Ponds is very toxic and radioactive, so the player has to wear the Hazmat Armor in order to explore the dimension. Later, the player can bring a Face Mask once the player has gathered the materials for one. This allows you to explore with different kinds of armor.

Realmstone for Vox Ponds is currently obtained by showing a trader in Creeponia a blank realmstone while wearing Hazmat Armor.

The surface of Vox Ponds is hill-like, with ponds of Toxic Waste everywhere. Standing in one of these pools will inflict Poison and Nausea. The trees and other foliage appear to be dead and/or radiated, and the structures are in a ruined state and abandoned.

Digging down about 30-40 blocks will reveal an underground lake. Root-like objects hang from the ceiling. This is the only place Fischers can be found. A few structures can be found down here as well. 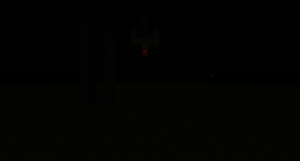 The underground lake of Vox Ponds. 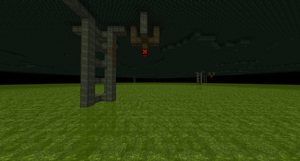 The mobs of Vox Ponds all have a robotic theme. There are a total of 9 hostile mobs in Vox Ponds. Out of those 9, only one is a hunter mob and one is unkillable. A majority of the hostile mobs have their own special abilities or statuses (e.g.:exploding, poisoning, etc), though not all.

The Vox Ponds Loot Table consists of the following items that can be dropped by all hostile mobs and bosses in the dimension (but not the NPCs):