Back to page
Add topic

Please sign your comments with ~~~~; this automatically adds your username and the time the comment was added. Thanks!

Right now the rules section is literally just "no this, no that." Are you going to make an improved rule section that details potential penalties? Shadowdragon25 (talk) 01:25, 30 April 2016 (UTC)

Personally I don't think you need to warn people for most vandalism, seriously any 8+ year old should know that "ezgg pvp noob and minecraft sivivelgames" or "jksdbfjkedjkjk" don't belong on a wiki. Besides, 2 weeks isn't permanent. Maybe 1 warning and then a ban would be better. What do you think?Shadowdragon25 (talk) 22:05, 30 April 2016 (UTC)

Is there an Advent of Ascension mod for Minecraft Pocket Edition? –Preceding unsigned comment was added by EatingSilencerforBreakfast (talk • contribs) 17:40, 19 July 2015 (UTC).

Not To metion the 'What to Bring' and 'Why come here' sections in the Overview. Why would anone want to go there exactly? -EatingSilencerforBreakfast (talk) 00:23, 19 September 2015 (UTC)

I have a pic Read the summary for more information.

I don't know what they drop unfortunately, in the snapshot I think the only thing they drop is hunter xp, not sure though. All of those bosses can currently be spawned by using a Bloodstone on their corresponding altars (will probably change). -EatingSilencerforBreakfast (talk) 22:12, 5 June 2016 (UTC)

Nice work! I have only one comment and it's a tiny little formatting thing: Did you know you can mix ordered and unordered lists? Your primary list is numbered (ordered) but the few items on it with sub-items also use "#" (or more accurately "##"). You can also use "#*" which preserves the numbering for the parent list, but allows for just bulleted sub-items. Just a thought, absolutely not a demand :) — Game widow (talk) 19:59, 15 June 2016 (UTC)

Voliant is based on the English word Volitant which means "having the power of flight". I'll post back for the other mobs. -EatingSilencerforBreakfast (talk) 20:53, 22 February 2017 (UTC)

About the mod ObsTrophies's problem[]

About the mod ObsTrophies's problem picture[]

It looks like you're missing a core mod. In order to get ObsTrophies mod to work, you also have to have the ObsCore mod installed alongside it.
To upload a picture to the wiki, you have to have an account. Once you have one, click "Upload file" on the sidebar. -EatingSilencerforBreakfast (talk) 11:25, 16 August 2017 (UTC)

No, Advent of Ascension currently doesn't exist for any Minecraft version except 1.7.10. -EatingSilencerforBreakfast (talk) 15:12, 17 August 2017 (UTC)

What is the error about Journey Map mod?[]

About some of NPCs names changed in game[]

Yeah, I've personally had trouble figuring out what to do about this issue. In most scenarios, we would change the name to what is displayed in game, but most of the early lottomen (e.g.: Withering, Haunted, etc), were put on the wiki by a developer or by someone related to a developer. So these names on the wiki are what their intended to be, but by the time they got around to adding the names in-game, they forgot that they had these special names already picked-out.

I'll look into Ethereus mobs and those two Overworld mobs, but I don't know anything about Labricon mobs (nobody does). -EatingSilencerforBreakfast (talk) 13:09, 25 August 2017 (UTC)

Hey, I recently got a new e-mail address, eatingsilencer@gmail.com. If you have any questions/comments, please send them to this e-mail instead. Thanks! -EatingSilencerforBreakfast (talk) 12:55, 28 August 2017 (UTC)

Can I upload new mobs pictures on this wiki[]

I have a question[]

I have a question. I just want to donate for Xolova on his Patreon, but I can't log in. It said "Please fill out the captcha to finish log in". But I can't see the blank that let me write the captcha. 22zhuyansong (talk) 03:08, 14 October 2017 (UTC)22zhuyansong

For the problem of the picture you can view it at here: https://adventofascension.gamepedia.com/File:Screenshot.png 22zhuyansong (talk) 11:14, 14 October 2017 (UTC)22zhuyansong

That is weird. Have you successfully signed into Patreon before? -EatingSilencerforBreakfast (talk) 00:05, 15 October 2017 (UTC)

Have you tried signing in since then and did it work? -EatingSilencerforBreakfast (talk) 20:51, 17 October 2017 (UTC)

About 2.5 new resources that I found[]

That is the 2.5 brand new resources that I have found during I download the mod pack. Including an unknown sword, an armor and the boss "Necromancer"'s life. Is that Xolova wants to update this mod finally? 22zhuyansong (talk) 09:47, 18 October 2017 (UTC)22zhuyansong

None of those are from 2.5. The sword is an unused sword from long ago (probably won't be reimplemented), the armor is the Hermetism Armor, and the Necromancer won't be added for a long time. -EatingSilencerforBreakfast (talk) 23:01, 18 October 2017 (UTC)

I had a good new! I had donate for Xolova on his Patreon today for $10 per month, and also his reward can be received on Nov.1st. I had to be the second donator successfully, and also every 3 month I will change reward (e.g. next three month in the future I will change the reward to $20 per month). Just let you know and inform you immediately. And also I have a question: When can Xolova update the mod? When can he receive the rewards from my donation? Once he get money can he update the mod immediately? 22zhuyansong (talk) 13:01, 22 October 2017 (UTC)22zhuyansong

The confirmation of my donation you can view it at here, it says 1 patron for $10 per month: https://adventofascension.gamepedia.com/File:图片_1.png 22zhuyansong (talk) 13:06, 22 October 2017 (UTC)22zhuyansong

Can Xolova see some one who donate for him on his Patreon? Because he doesn't have any actions on his twitter and forums! 22zhuyansong (talk) 03:26, 23 October 2017 (UTC)22zhuyansong

About lots of future mobs[]

Some of those aren't upcoming. Blissard, Compeer, and Gnawer are already in the game as Minions. The Immortal Bruiser, Immortal Defender, Immortal Wizard and Immortal Warrior are the Immortals. -EatingSilencerforBreakfast (talk) 15:21, 4 November 2017 (UTC)

All nevermine mobs with both Chinese name and English name in the game! 22zhuyansong (talk) 05:11, 5 November 2017 (UTC)22zhuyansongFile:虚无世界生物（Advent of Ascension Mobs）.pdf

Yes, please help us check this problem, otherwise vandalisms will never be solved. Also due to a bug, all the contributors have been blocked by Angrydog001, which is the admin of Chinese wiki. 22zhuyansong (talk) 01:41, 18 November 2017 (UTC)22zhuyansong

Do you think you can explain your problem more in-depth? I don't speak Chinese, and the translator isn't working properly for me. -EatingSilencerforBreakfast (talk) 00:16, 19 November 2017 (UTC)

Sure! Because of Gamepedia AWS Migration, everyone has the same IP address (issue). If I block an IP address, everyone (except administrator) can't edit pages. --Angrydog001 (talk)06:37, 20 November 2017 (UTC)

Curse is currently trying to resolve this issue. I'm not sure there's much I can do.-EatingSilencerforBreakfast (talk) 12:23, 20 November 2017 (UTC)

I have noticed on Minecraft Forum that Xolova will continue creating AoA as well, is that true? 22zhuyansong (talk) 04:07, 19 December 2017 (UTC)22zhuyansong

I think each individual mob page need to be enhanced, not only a short information. We need to provide more information like behavior, drops or strategies on their pages. 22zhuyansong (talk) 11:54, 27 December 2017 (UTC)22zhuyansong

Please tell Xolova on the Minecraft Forum. Even though he really wants to abandon AoA, and take care of his two new games, but many people (including my Chinese friends) want to say to him, he need to let someone or group of people take over the work of AoA. Because this mod is the best mod ever created for Minecraft, it's just like a big changes in Minecraft, it adds lots of new dimensions that can let players to explore. We don't want this mod be abandoned. So please, you tell Xolova what I just said to you! Let him know that he need to let someone take over the mod! Thank you very much! 22zhuyansong (talk) 01:53, 6 January 2018 (UTC)22zhuyansong

Note about structures that are biome-locked[]

Test was a success

I've put these images here so they don't show up in Special:UnusedImages. 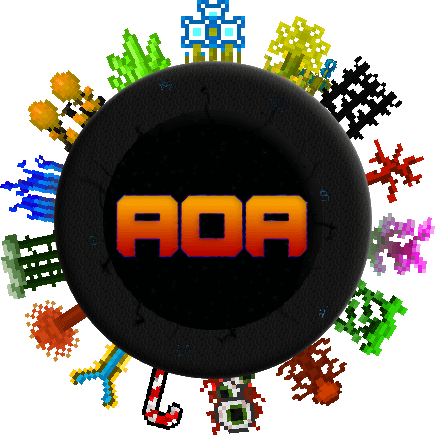 I mentioned you on Discord, but you did not reply, so I came here... :(

Have you seen the styled Modding API page on zhwiki (Chinese Wiki)? If you saw it, may I know about whether the styled page would be easier to read? Thanks a lot!

And could you please log into Discord more often? And slack? Thanks!

I will say though, I think scimiguy has a plan for what he wants done with the modding api documentation, so maybe ask him about it first. -EatingSilencerforBreakfast (talk) 14:14, 9 February 2019 (UTC)

About the texture overhaul on Advent of Ascension Wiki[]

Hi silencer! I was planned when 3.0 official release, the pictures on the wiki should get an overhaul. I can help you to upload isometric renders of mobs and generated structures from the mod! ZYSTerry (talk) 05:45, 9 February 2019 (UTC)

Sabretooths can drop any items from the rare loot table as well as the precasia loot table. They also have a unique drop to themselves.

the StrawPoll extension has gone into maintenance mode and their upcoming changes make it incompatible with Gamepedia. I see that you've used it on your main page here and that the other language versions of this wiki also have it installed (not sure if they use it or not). Because the extension won't work here after their next round of changes, we are forced to remove it. I'm just letting you know so that you have time to make the necessary changes here to avoid broken sections on your wiki. — Game widow (talk) 21:36, 4 March 2020 (UTC)

Thank you for informing us, I have removed the strawpoll from the main page. I will still need to talk to the other foreign language wikis. -EatingSilencerforBreakfast (talk) 04:01, 5 March 2020 (UTC)

Hi there, I'm the new Wiki Representative for the Advent of Ascension Wiki, taking over from User:Surafbrov. I hope everything is running smoothly, but feel free to ask me questions if you have any. My areas of expertise are listed on my profile. You can reach me by leaving a message on my talk page, on Discord at Moviesign#6611, or by email at Moviesign at fandom.com. —Moviesign (talk) 19:42, 17 February 2021 (UTC)

Just a heads up, a member of the Vanguard team, User:DoubleCookies, will be conducting a CSS/JS review and updating the theme in preparation for the UCX rollout. He will temporarily be given admin rights in order to use the ThemeDesigner. This will help make the UCX transition go more smoothly for you and your viewers. If you'd rather do this yourself, just let me know and they will move on to another wiki. —Moviesign (talk) 13:06, 15 June 2021 (UTC)

Fixing code issues on this wiki[]

Hello! I'm Shii, and I represent Fandom's Vanguard volunteer team. We help communities adopt to new technologies and features and to improve their technical performance. We have spotted some code issues on this wiki that I'd like to make fixes to, which should not break anything further nor affect the wiki content.

One of the maintenance categories I am assigned to handle is Category:Pages using duplicate arguments in template calls. One of your edits to your subpage Skellox (revision 94437) has resulted in the duplicate parameter versionadded with values 1.0 and 2.2. Which value do you wish to keep? If both, then they must be uniquely named. Let me know preferably before 30 July 2021; otherwise I shall go ahead with resolving the issue. --BryghtShadow (talk) 03:29, 22 July 2021 (UTC)