The Deeplands is a dark, subterranean cave dimension. 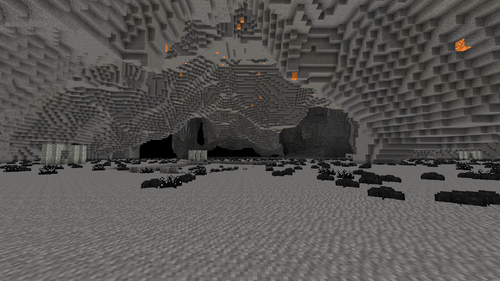 The above screenshot with night vision.

The Deeplands is a tier 1 dimension. From Deeplands, the player is able to access Crystevia.

The Deeplands' landscape is enclosed like a massive cave. The ground level is completely flat, but the ceiling is bumpy and hilly, with some parts reaching down to the ground.

The surface is covered in plants, giant fossils and large black mushrooms, and has deep crystals generating in the top layer of the floor, making them visible to the surface. Pillars that contain balconies generate periodically throughout the dimension. The pillars go from the ceiling to the floor.

In the ceiling of the dimension, veins of Charged Runium Ore and Deep Cases generate above y = 70.

Layers of Dimensional Fabric generate on top of and on the bottom of the Deeplands.

The structures that generate in the Deeplands are:

The mobs of the Deeplands all have a rocky theme. There are 9 hostile mobs in the Deeplands. Out of those nine, 1 spawns in a structure.

The Deeplands Loot Table consists of the following items that can be dropped by all hostile mobs and bosses in the dimension (but not the NPCs):

Chunk data for the Deeplands can be found in the AoA_Deeplands folder in a world's save folder in the player's Minecraft directory.