The following page lists scrapped features. These are features that were either mentioned by a developer or planned to be added to the game by a developer at one point, but were later confirmed to be scrapped.

Note that this page does not list features whose status on being scrapped is unknown. If a developer mentions something, but does not follow up on whether its scrapped or not, then said feature would go on the mentioned features page instead.

Hermetism was a skill that would have involved converting the player's unwanted items into coins.[1] The Hermetism skill icon was added in the 2.4 update but the skill remained untrainable.

All items that are not from the mod (such as Vanilla items), would have been rated at a low value. Xolova had mentioned the possibility of adding a config option that could be set to increase the value of said items.

A Hermetism Master and Hermetism Armor set both existed in the game upon Hermetism's introduction. The armor's full set bonus did not work. In the mod's files, an unused texture for a Hermetism Table could be found.

As of AoA3-Snapshot 3, the hermetism skill icon had been removed, its place being replaced with alchemy. The mod developer has confirmed that this skill has been scrapped.[2]

Robbery was going to be a skill that would allow additional interaction with a couple of the NPCs, but it was mostly going to be new NPCs created for various worlds allowing the player to pickpocket them.[3]

The skill icon for robbery was added in ??, but the skill remained untrainable. As of AoA3-Snapshot 3, the robbery skill icon was removed from the game, its spot being replaced with engineering. The mod developer later confirmed this skill to be scrapped.[2]

Scimiguy had said that other bullet types besides Limonite Bullets were going to be added but this did not happen.[4][5] One example of this was the rosite bullet.[4] The bullets may have had varying damage or flew slower.[5] These bullets were scrapped because they would have caused problems with guns that had effects.[6]

Several swords and greatblades were added in the 2.5 Snapshot. They were not added in the mod in any version released after, and Scimiguy confirmed that they have been scrapped.[7]

For documentation purposes, the weapons and their stats are listed here.

The following weapons were once planned for future updates.[citation needed] However, they have been confirmed scrapped.[8]

These have been scrapped and will not be added.

On 24 February 2015, Xolova added claymores to the weapons page of this wiki.[9] The addition included a brief description of what claymores were, and a list of claymores.

Claymores would have functioned as explosive bows that used Energy instead of Holly Arrows.[9]note

Claymores were never added to the game as a weapon, but their textures could be found on the Ancient Cavern Banners until 3.0, when they were replaced with the sticklers.

Claymores have officially been scrapped.[8]

These have been scrapped and will not be added.

During Advent of Ascension's development, a number of mobs have been developed but later confirmed to be scrapped.

On the mod's Minecraft forums thread, a list of mobs without context was released on 10 December 2015.[10] It included the mobs for the 2.5 snapshot dimensions, the Shyrelands, and several other unknown mobs.

On 21 August 2018, Xolova added a list of names of unimplemented mobs to the wiki in this edit.

Scimguy has confirmed that all of these mobs have been scrapped.[11]

The following list is a compilation of mob names from the list of the Minecraft forum thread and mobs that Xolova added to the wiki himself.

These mobs have models and textures, however they have not been coded and were never officially revealed. The following screenshots were created by giving their models/textures to other mobs.

They are confirmed to be scrapped.[8]

The Necromancer is an unreleased boss. A reveal suggested that he could be spawned in multiple dimensions, with his ability and drops being different depending on what dimension he was spawned in.[32]

Necromancer has an unused model, texture, boss bar texture, and boss music in the mod's files. Reveals showed that the Necromancer would also have been called the Warlock of Death.[32]

The boss is considered scrapped.[8]

Aflora was planned to be the boss of The Capricorn.[34] Not much is known about either. The Capricorn and thus Aflora were scrapped.[11]

35+ structures and NPCs were originally intended to be implemented.[35] This did not occur however.

The NPCs have been scrapped.[8]

In the 2.5 snapshot, one of the new NPCs exists in the game: the Dinosaur Breeder, which can only be seen by typing /summon nevermine.DinosaurBreeder.

The following features were once planned, but are now confirmed to be scrapped.

Many new dimensions have been proposed over the course of development.

Xolova has stated that he does not believe any of these dimensions should be added, at least under their current names, as most of them lack any sort of substance beyond a name and a vague idea. Scimiguy's plan is to adhere to this request.[36]

If a dimension with a similar concept to those below is released in the future, it will almost certainly have a name different from anything in this section.

These were 4 dimensions that existed in the 2.5 Snapshot that are not present in an official release. They are sorted in the table from most complete (top) to least complete (bottom).

Scimiguy has confirmed that all of them besides Labricon is scrapped.[37]

The following mobs were created for the 2.5 Snapshot dimensions (see Scrapped features#2.5 Snapshot Dimensions) - the Everland, Playtopia, and Ethereus.

Mobs for the planned Everland dimension were revealed on 24 October 2015.[38] These mobs exist in the 2.5 snapshot, but are incomplete, having no drops, abilities, or sounds. Most of them have the same stats.

When they were revealed, Xolova has labeled Bloger and Blockhead as spawning in a structure. However, in the 2.5 snapshot they spawn naturally.

Mobs for the planned Playtopia dimension were revealed on 25 October 2015.[39] Unlike the Shyrelands and Everland mobs, these mobs do not exist in the 2.5 snapshot. What is known about the following mobs:

Upon being revealed, Xolova had labeled the Toy Soldier and Blockomaton as spawning in a structure, and the Builder Blocker as a rare mob[42].

Ethereus mobs have models and textures, however they have not been coded and were never officially revealed. The following screenshots were created by giving their models/textures to other mobs.

The following bosses were created for the 2.5 snapshot dimensions.[citation needed]

The boss music for the above bosses was revealed by looking in the mod's files.

Cyberzon was going to be a cyber-themed dimension. It was originally planned to be implemented not long after 2.7.[45]

A contest was held for Cyberzon in order to create its mobs as well as abilities and music for its boss, Retrocon.[33] The beta for The Shyrelands was released as the prize for the first wave of winners.[46] However, the second wave's prize, the beta for the Everland[47], was never released, and the contest was never officially acknowledged following this.

Oshellus and Democron were two dimensions that were planned to be released side-by-side together in an update titled the Angles & Demons update. Oshellus was an angel dimension, while Democron was a demon dimension.

Xolova has stated that Oshellus is completely fleshed out, but Democron needed work in order to make it less like the Abyss.[48]

An ice-themed dimension that was mentioned a few times. Almost nothing is known about it.

The Overgrowth and The Undergrowth[]

The concept behind these two dimensions was that the Overgrowth's activity took place on the surface, with it's underground being bare. The Undergrowth was the opposite, its underground was blooming, with a bare surface. The dimensions were scrapped due to generation time being a problem. They were eventually replaced with Runandor and Barathos respectively.

Reveals have shown that:

Quests were a mentioned game mechanic. A reveal showed off what appears to be the names of various quests, sorted into different folders labeled with difficulties. Quests would not have been repeatable once completed.[51]

Scimiguy has said that quests are scrapped.[52]

The following table shows the quests alongside the difficulty they were supposed to be:

The Baroness originally was going to be added in the 1.1 update, but was scrapped due to issues and replaced with the Hive King.

The old Baroness design was redder and had a more generic model. Her subtitle was originally the "Lady of Destruction". Reveals implied that she would have had a different AI then the current Baroness. 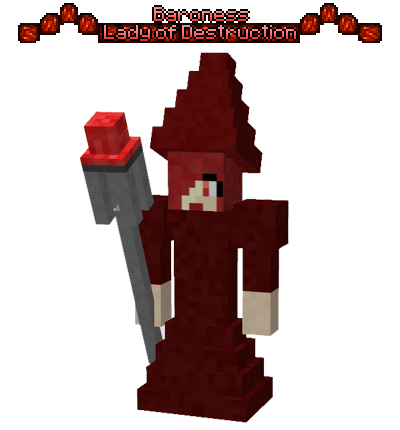