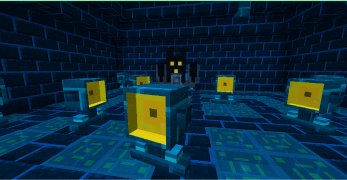 A Rune Templar minigame in progress.

Minigames are small events that the player can choose to play.

There are currently 1 type of minigame that can be played within the game.

Each minigame has different ways to play it. If the player wins a minigame, they will receive special rewards.

The Rune Templar Minigame is a minigame from the Runandor.

How to Play[edit | edit source]

To play this minigame, the player has to locate a Rune Templar. In normal play, they can be found in their underground Runic Rooms in Runandor. There are four color variants of this minigame: Red, Blue, Yellow and Green. Depending on the color of the minigame dictates the individual components of the minigame.

When activated, the Rune Templar mob will have full health and will gradually start losing it. A Rune Templar has 400 (

Once its health reaches zero, the Rune Templar will deactivate and drop the reward.

The rewards for this minigame are: 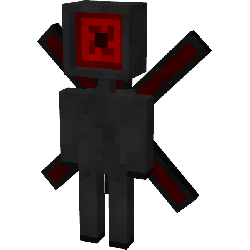 The Exoid minigame was previously playable in the Vox Ponds.

To play this minigame the player used an Apoco Stone on an Exoid Station, found on Exoid Platforms. Upon using the Apoco Stone, it was consumed and an Exoid would spawn in.

Once spawned, the player had to kill the Exoid. Once killed, another Exoid spawned at one of four corners of a 90x90 area (on the x and z-axes), centered from where the last Exoid was killed. The player had to then find the new Exoid that spawned this way and kill it five times in a row to win the minigame. If the player took too long to find an Exoid, it would explode. The fifth Exoid dropped the minigame's rewards upon being defeated.

Upon defeating the fifth and final Exoid, it dropped the following items:

This minigame is no longer playable unless the player had obtained Apoco Stones in a version where they were obtainable in game before the minigame was relegated to unused status.

The dimension Immortallis contained several minigames played during the player's time there. Beating the minigames in Immortallis would grant the player access to the next room in the dungeon.

These were removed along with the dimension in 3.5.

A gold-collecting minigame existed in rooms 2 and 6 of Immortallis. The objective of this minigame was to collect gold and deposit it into the gold accumulators.

To play this minigame, the player had to defeat Goldums/Goldus and obtain the Impure Gold/Pure Gold from them respectively, and deposit the gold in the Gold Accumulator/Pure Gold Accumulator (depositing could be done by using the gold on the accumulator). The player could only have one gold on them at a time, attempting to collect more will not work until the player has deposited the original gold. The player then had to deposit 5 gold in order to beat the minigame and progress to the next room. The amount of gold having already been deposited was kept track in the Pluton tribute bar.

A mob-fighting minigame existed in rooms 4 and 8 of Immortallis. The objective of this minigame was to defeat 25 mobs.

To play this minigame, the player must simply defeat 25 mobs provided in the room. In the 4th room, these include Skelekytes and Skeledons, while in the 8th room these include Urvs, Ghastus, and Visages. Once 25 are defeated, the player would unlock the way to the next room. The amount of mobs having already been defeated was kept track in Erebon's tribute bar.