The Infusion Table is a utility block that is used to enchant and craft weapons or armor. 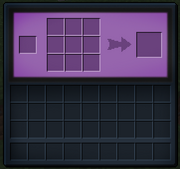 The player can press use (right-click) on an Infusion Table to open its GUI. The Infusion Table's GUI is almost identical to that of a crafting table with one exception: there is an extra input slot to the left of the 3x3 crafting grid.

If all the items are in the correct places, a weapon or armor piece will appear in the output slot to the right of the 3x3 grid. Unlike with enchanting, the player does not have to train their Infusion skill in order to create weapons or armor.

In order to be able to use the Infusion Stones on the Infusion Table, the player has to be the correct level of Infusion. The stones, the levels needed to use them, the amount of xp they give, and the corresponding power stone they create is shown in the table below: