The Hive Nest[1] is a structure that generates in the Barathos dimension where the Hive King boss can be battled.

Hive Nests have a 1 in 650 chance to generate per chunk by default. Only one hive nest can generate in a chunk.

Hive Nests will only generate if the block they will generate on is the biome's top block (Baron Ground). 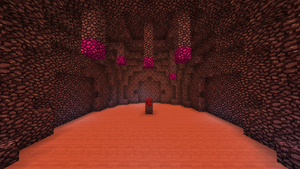 The inside of a Hive Nest.

Hive Nests are small semi-spherical structures that are hollow on the inside. The inside of the structure is mostly empty, save for some hive lights hanging off the ceiling and a hive spawner in the center.

The player is able to configure the generation rate of Hive Nest in the mod's config file. By default the gen rate is set to 650.