Advent of Ascension Wiki
Register
Don't have an account?
Sign In
Advertisement
in: Pages with blast resistance stat, Blocks

The Extraction Device is used to train the skill Extraction.

The obsidian that forms under the device will have to be removed to use the device again. Upon using the device, the player has a chance to actually find an item, otherwise finding nothing. As the player levels up in extraction, more items become available. These items are:

Chance to obtain items at all[]

Experience is calculated with the forumula XP until next level / special value, with the special value being set in the code. Below is the list of special values placed in the denominator, based on levels:

One of the above values, based on level, is plugged into the denominator of XP until next level / special value to calculate the amount of experience the player will obtain based on the player's level. This chart is a Work in Progress

The following graph represents the xp required to level up extraction. 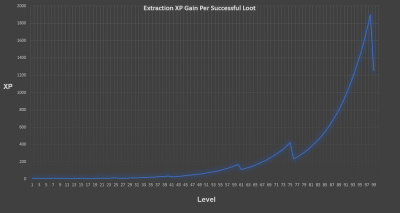