Crystevia is a cavernous dimension themed around crystals. 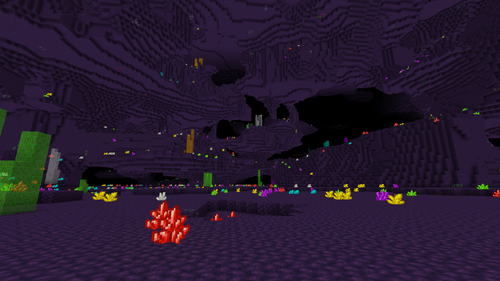 Crystevia is filled to the brim with crystals that are used as both foliage and currency. The Realmstone for Crystevia is obtained by using a Deep Crystal on a Case Construct with a Blank Realmstone in the player's inventory.

Crystevia has a cave-based terrain generation similar to that of the Nether, though the presence of water and harmless crystals in place of fire and lava makes navigating Crystevia easier.

There are four structures that can be found in Crystevia:

The mobs in Crystevia are known as "constructs".

The Crystevia Loot Table consists of the following items that can be dropped by all hostile mobs and bosses in the dimension (but not the NPCs):