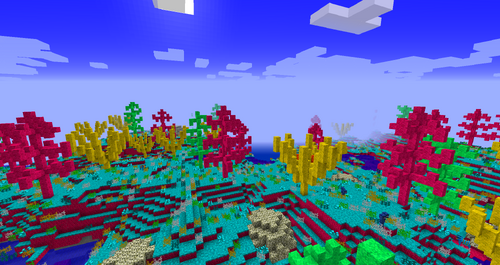 A buffet world with the biome from the L'Borean dimension.

AoA Generic is an option that the player can select for their world generator for the Buffet world type. It was added in 3.4.

The player can set their Buffet world to AoA Generic by clicking the "World generator" button enough times, until it mentions "AoA Generic".

Worlds generated with AoA Generic generate like the overworld. The underground is made of stone, with bedrock at the bottom. The world has a sun/moon/stars, as well as clouds, similar to the overworld. Large water lakes generate in the world. The rest of the world's appearance is dependent on the biome-selected. For example, a world with the biome from Creeponia will have caves, but a world with the biome from Haven will not.