The Portal is the structure the player must build in order to travel to different dimensions in Advent of Ascension. All dimensions are accessible via the teleporter, including the Nether.

To access the dimensions in the mod, the player has to create a portal (pictured right).

The player must build the frame to be 5 blocks long and 6 blocks tall, and all of the above listed materials must be present in the portal structure. The Carved Rune of Power has to go in the center spot on the bottom of the portal frame. The rest of the carved runes can go anywhere. The corners are not optional (see diagram below).

When the portal frame is built, there should be a 3 block long and 4 block tall empty space inside the frame for the portal to go in. 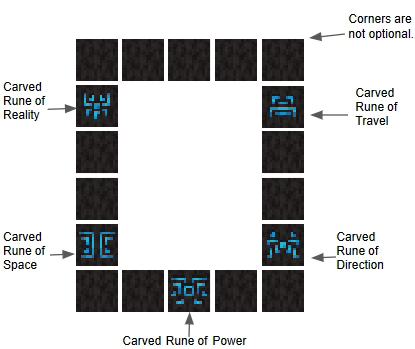 When the player or entity touches a portal block from any side, it will transport the player (or most entities) to a different dimension instantly.

Entering a portal from the overworld should take the player to similar coordinates in the other dimension, the scale is 1 block:1 block, more or less. This is also true for the Nether portal that is obtained with the Nether Realmstone.